How I doubled my salary in 2 years! 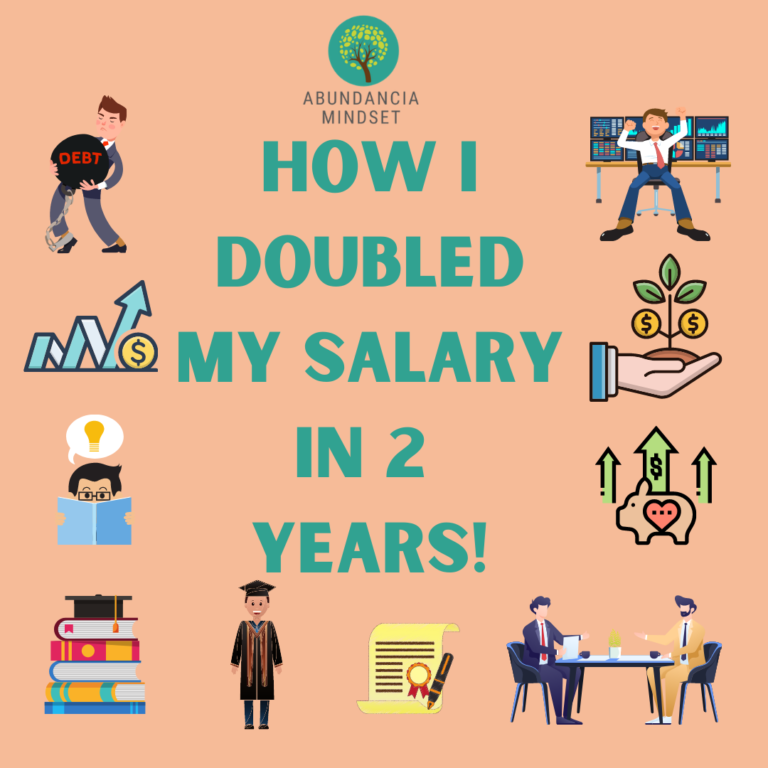 Whether you’re deeply in debt or aggressively trying to save or invest, we often times are limited to our current job & salary. This is probably one of the worst feelings one can have as it makes you feel that money is the only thing that can make a difference. From my experience, money matters until the point that it doesn’t.

Back in 2014 I was working for an amazing Oil & Gas organization which I enjoyed working for very much, mainly because of the culture and the people. I had been working here for about 5 years and had made a great deal of friends and had established myself as a key player in my team.

I had started at this company while I was a junior in college as a help desk (think of a call center, or that typical entry level job) and moved to various roles until I decided to pursue a Cyber Security path. I had the privilege to establish a security program at this company and I loved the work that I was doing.

Unfortunately, as with most companies, if you start a certain salary, that salary doesn’t exponentially grow, but it might increase from 2-4% (depending on your employer). (NOTE: This is the reason why I believe you should jump between jobs to increase your salary, and expose yourself to other environments).

At this point a good portion of my salary went to pay my college tuition as I paid out of pocket and was accumulating college debt, additionally I loved to travel and felt that I would need more to fund my trips . This was a driving factor for me to push for a negotiation. As I was preparing to renegotiate my salary for the new role (which at that time I was asking for a $10k raise), the 2014 oil crash occurred and suddenly everything changed.

Major layoffs started occurring nationwide for many Oil & Gas companies and some went down and never came back. The organization I was working at also started laying off (first by giving “early retirement” to some of the senior personnel, and then silently laying off many others). There was a lot of uncertainty amongst my friends & colleagues working there, and I remember someone saying “Be thankful you have a job”.

I know what they meant; however, I still had a feeling of being underpaid for my role and frankly I was never worried about losing my job as it was just myself and my director running the security program that we created. Perhaps it was me being naïve, or just that feeling of being “limited” by these circumstances which I had no control of… or did I ?

Around this time I received a call from a recruiter offering a job at a retail organization, and I also became aware that this company had recently been hacked. I thought it would be an interesting experience to be part of a company that had been breached and have an opportunity to go through that recovery process. Realizing that this would be a good opportunity to expand my skillset, I decided to interview for it and ended up negotiating a $20k+ jump from my current salary.

I gave my two weeks notice to my Oil & Gas job and they countered and offered to match my new salary. I was a bit shocked, but politely declined nonetheless. To be honest, at this point I was more excited about my growth as a cybersecurity professional and I knew I had to jump to other industries where I could learn more. Additionally, I felt that If I stayed in my current organization, it would have been due to the money and I would have been resentful in how this raise was never given in the past. It was probably one of the best decisions I’ve ever made!

I started my new gig in 2016, and at this time I had also applied for grad school for Master of Science in CyberSecurity at the Univeristy of Houston – Go Coogs!

Since I decided to pursue cybersecurity, I figured a masters program would allow me to grow further in my professional development. Previously I had planned for my Oil & Gas job to pay for my schooling; however, that would require to extend my contract for at least 2 more years and I decided to just pay out of pocket. I figured this would be a good investment for myself and I knew it would create other opportunities later.

It was tough working a full time job + full time school; however, this wasn’t anything new as I had done the same since my undergrad days; however, I had a great group of classmates that made my studying much easier!

Working at this retail organization allowed me to expand my skillset, inspired me to start writing about security and launched Syspanda.com – a security blog which allowed me to document all of my cybersecurity projects.

During this time I had also planned on obtaining a security certification, The Certified Information Systems Security Professional or CISSP. I understood the importance of this certification and the doors it would open if I obtained it. A quick google search will give you an idea of the salary range one can get with this certification.

This certification requires you to have at least 5 years of working experience in one of 8 security domains. Luckily, I had been working in the field for about 5 years and was able to meet the requirements.

I studied for a good 2 months and took & passed the CISSP exam! I documented my journey here. Also, during this time I was working on my thesis which I was able to publish in May 2018 at time of graduation!

Looking back, I have no idea how I was able to handle all of that! However, I had a lot of fun and I knew this was all part of the process, I put in the work and patience, and soon it would finally pay off!

Looking ahead, another jump!

After 2 busy busy years! I had finally graduated, and had obtained the certification I was looking for. During this time my blog had gained some traction, and after publishing my thesis, I began to get some job offers from local and global companies such as Elastic in Amsterdam.

I landed another job interview with a different organization and was able to negotiate another $40k jump from my current salary. I decided to take it and said goodbye to the retail space (for now!). At this point I had more than doubled my salary in just 2 years and had 0 debt from Grad school as I was able to pay each semester in full. The return on investment was a no brainer (Spent about $20K+ out of pocket for grad school and jumped $40K+ in salary).

“Money matters until the point that it doesn’t.“

In my early 20’s I thought that the solution to all money problems would be to make a 6-figure salary, over the years I realized this is not true. After experiencing dealing with debt, seeing friends, and loved ones continue on a path of living beyond their means, I realized that for some, it will never be enough; However, as you can see, if you feel stuck, restricted, frustrated, or undervalued always remember that You have what it takes to change your situation. Continuous investing in yourself is the best decision you can make for your financial future.